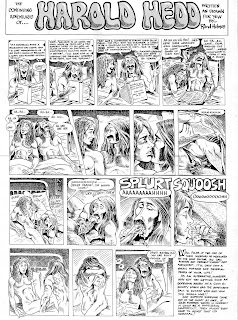 In the S.Clay Wilson cartoons, though not malicious, gays are largely there as part of a rambunctious spectrum of “perverse” sexuality. The Osborne comic is more about the thrill of depicting famous film stars roughly buggering each other with a few sissy comments. There’s no condemnation or real mockery in them, but this strip by Holmes is the first which is unabashedly positive. It is also quite contemporary. “Everything You Always Wanted to Know About Sex (But Were Afraid to Ask)” had aroused much ire in the emergent gay communities and the new Gay Lib movements, and there were efforts in quite a few countries to have the 1969 book taken off shelves because of its obviously bigoted and ignorant attitude towards homosexuals. Gore Vidal wrote a magisterial demolition of the book. Then it’s the rest of the strip, with a sympathetic but explicit gay sex sequence, which contradicts Reuben, and would produce so many subsequent problems with the censors. Finally, you have Holmes’s final exhortation to his readers.

This strip had a checkered history throughout the 1970s. It originally appeared as just one more instalment in "The Continuing Adventures of Harold Hedd," published in the underground newspaper “Georgia Straight”, 19-22 October 1971. It was published in a censored form then, with the sex scenes removed because the printer refused to publish them. It was then reprinted in the May-June 1975 issue of “Body Politic”, a Canadian gay magazine. That issue was ordered off the newsstands by the Toronto Morality Squad. The next issue, #19 July-August 1975, had an article about the previous issue’s censorship and ran a partially censored panel from the strip of two men giving each other head on the cover. The blowjob depicted in the original was covered by a black lightning bolt labelled "Toronto Morality Squad." But this censoring zap, overprinted on the illustration, could be seen through. The collective had to order a second print run. 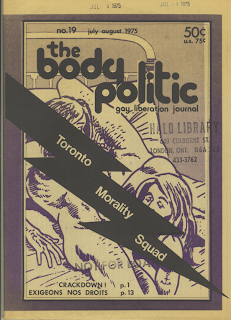 It was reprinted in the 1973 Canadian sex comix anthology “All Canadian Beaver Comix”. Then the cover came with this banner in the corner, which is a bit more disheartening, employing more familiar clichés. However, it may be a bluff to entice readers expecting a laugh and then confront them with this strip. 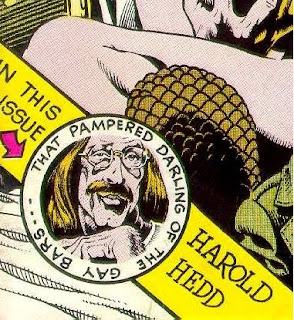 Holmes would also produce the cover for the first issue of “Gay Comix” in 1980. 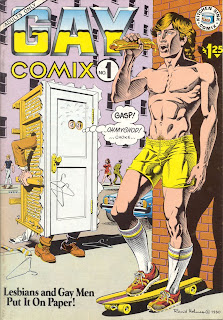 Excerpt from upcoming book The Artist Himself: A Rand Holmes Retrospective by Patrick Rosenkranz

In one of his most controversial strips Harold Hedd and another man enjoy oral sex on a brass bed. The printer insisted in blacking out many of the panels before printing that week’s paper, said Lester. Holmes left town with Dan Matheson before the issue appeared. “We were on our way to Edmonton and we were doing diet pills,” said Matheson. “We were driving and driving and he said, I love you, and I said, I love you too. He says, but I want to fuck you and I said, oh no. You’re the wrong shape. He says well it’s too late. I came out in the Georgia Straight. It will be out on the street when we’re in Edmonton. I went, you’re kidding me. We had a big fight then. I didn’t see that cartoon until I got back from Edmonton. I was all worried about it but it came to nothing. He lived upstairs and I lived downstairs and we were putting messages on a big bayonet and sticking it in each other’s door. Then I moved out and didn’t see him for about a year or two.”
This infamous comic strip dovetailed with the growing emergence of gay and lesbian activists, who were quick to claim Holmes for their cause, but to him it was personal, not political. He was confused about his orientation, and needed a good girlfriend, said Matheson. “He was fighting gay or thinking he was gay. He had a lot of pressure around sex. A lot of pain around sex. A lot of karma pushing him. He’d get paranoid. He even told me once that it’s going to be like Hitler again, and they’re going to round up all the gays.” His paranoia on all subjects political gave an Orwellian edge to his Straight illustrations. He depicted government spies run amok, espoused sexual freedom, gave shoplifting tips, and generally encouraged sedition. He’d found his perfect pulpit at the Straight.