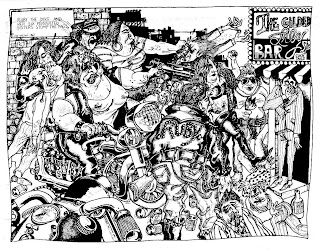 “Ruby the Dyke and Her Six Perverted Sisters Stomp the Fags” (1967) in “Radical America Komiks, 1969
An early example of the patented S. Clay Wilson battle panorama. This early in his career he enjoys drawing disparate and unlikely groups having it out, whereas later these frenzied scenes are usually reduced to pirates or bikers. Hence diesel dykes beating the shit out of fashion gays. Ruby the Dyke will become a regular character in his work. It is a little difficult to discern in the melee, but Clay’s “fags” are typical stereotypes of the mid-60s. They wear tight “fag pants”, and Cuban high-heeled, sharp toed “fruit boots”, and the striped shirts that were thought rather gay at the time too. And why, there’s a gay bar too, “The Gilded Lily”, because that’s the sort of name people tend to think gay bars are called. Anyway, here it is, violence, with the suggestion of “perverted” sex because of the nature of the combatants. 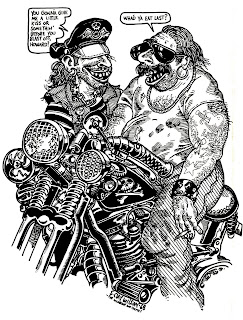 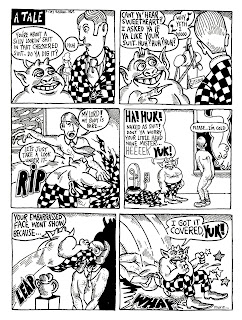 “Yellow Dog” #8, 1969
Also another early appearance of a S. Clay Wilson stalwart, the Checkered Demon. Here meeting a lisping sissy in fashionable attire, although it’s the second panel that merits the inclusion here. The sixth panel – is it sex or violence – take your pick.
“Yellow Dog” was a very early San Francisco commix anthology. Most of its content were either whimsical cartoons or sequences of psychedelic doodles. So the two pieces by S. Clay Wilson here are little less in-yer-face than thbe works he would very shortly be publishing in “Zap” and that would define his career and subject matter.
Posted by ukjarry at 04:35

"In Ruby the Dyke and her 6 perverted sisters stomp the fags" I think that Ruby and her sisters represent Wilsons fair despite of Anyone who would act that way, and who would expect or think that fags were like that. To be like that in Wilson's comics views is to be like Ruby and her 6 PERVERTED SISTERS, not fellows or buddies but "sisters", because they are suppressed effeminate bullies in their mental states. Likewise the Gay Pirates ( who are supposedly real "shit kickers") and the Lesbian Girl Pirates is making fun of that whole mind set of the ultra Macho positioning. If you've ever been in a biker bar and or a lesbian bar. You find that there is an appeal to the Overly swaggering masculine stance. Which is slanted towards the supposed femine denizens thereof.