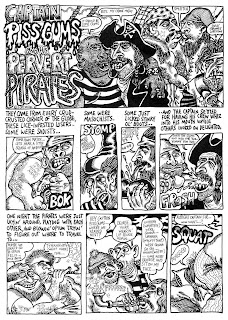 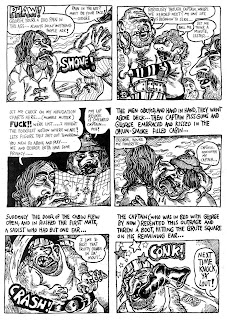 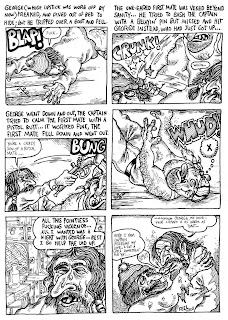 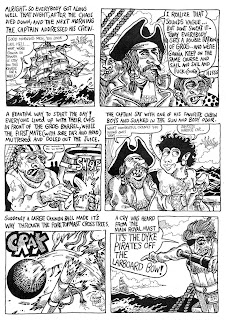 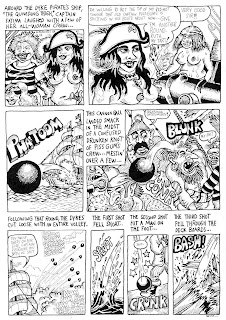 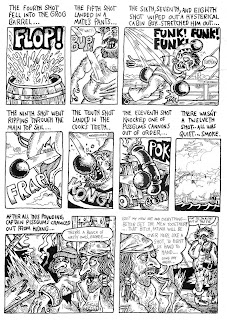 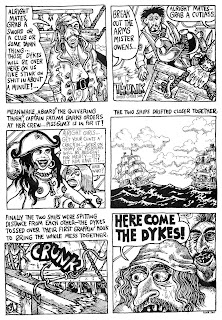 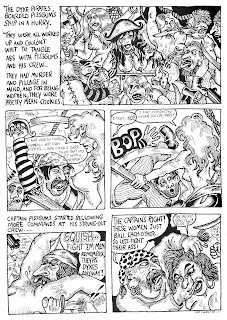 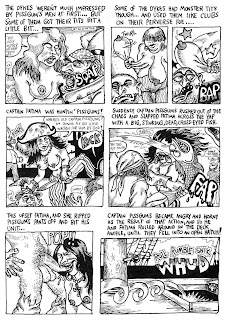 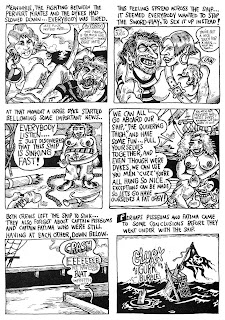 What to say, what to say. I suppose there’s some inspiration in the old line about “rum, sodomy and the lash”. Rough old salts who are as “perverted” as he can make them. Almost no fetish left undrawn. George wearing lipstick might be thought to be classic gay cliché, but it’s done in such a way as to show it’s atypical.
All this is recognisable S.Clay Wilson. Sex and violence in the most grotesque combination. Never knowingly moderate, Wilson’s drawings are a deliberate affront, a reaction against sterile bourgeois good taste and standards of living. Ultimately though, they’re only ever lines on paper.
This work is surprisingly important. “Zap” was one of the most important and influential of the underground commix. And this work was particularly influential:

“Not to diminish Crumb’s major contributions to ”Zap” or underground comix in general, Moscoso credits S. Clay Wilson with inspiring the contributors to feistily bust taboos. “First Wilson comes out with the “Checkered Demon,” then “Captain Piss Gums and his Perverted Pirates,” in which he is drawing my worst fantasies! Frankly, we didn’t really understand what we were doing until Wilson started publishing in “Zap”. I mean, he’s not a homosexual, yet he’s drawing all these homosexual things. He’s not a murderer, yet he was murdering all these people. All the things that he wasn’t, he was putting down in his strips. So that showed us that we were, without being aware of it, censoring ourselves.”” – Steven Heller, “Print”, 2000

As a side-note, and since this page gets looked at a lot:
S. Clay Wilson suffered a debilitating head injury several years ago. Donations to his care can be made at
http://sclaywilsontrust.com

Everything you an imagine is real. Have a good day! Keep on sharing knowledgeable ideas :)
imarksweb.net